The Community Center was established in 1981 at the initiative of the Carcavelos Parish and its founder was priest Aleixo Cordeiro. 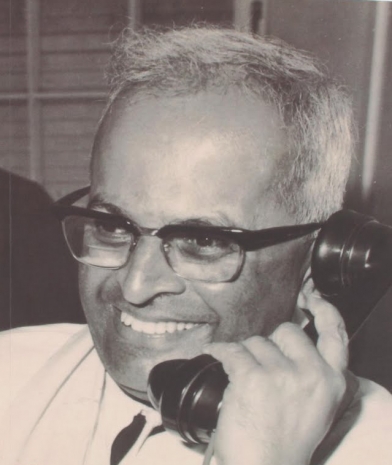 Father Aleixo was born into a deeply Christian family with a profound apostolic awareness, which always fostered a sense of care, openness and acceptance towards others, particularly the most vulnerable. Such an environment played a decisive role in three of the eleven brothers becaming priests.

Ordained presbyter on the 9th October 1938, in Goa, he later went to Rome to pursue his studies. However, from 1940 onwards, due to World War II, he established himself in the Patriarchate of Lisbon.

A man of great intelligence, remarkable culture and extraordinary educational skills, he served as a teacher at the Almada seminary for nearly  eleven years, leaving an enduring impression on those who knew him.

Extremely passionate about the Christianity Courses, he dedicated many years of his life to the Movement, becoming its Diocesan and National Director.

At the parish level ― and always in the Lisbon Diocese ― he worked at the Our Lady of Fatima Parish for about four years; between 1956 and 1970, he served as parish priest in Ajuda and, finally, in Carcavelos, his last parish where he worked for almost 27 years.

It is exactly in this parish service that his extraordinary pastoral sense became most evident, along with his unique vision regarding the role of the Church in the today’s world.

Such a vocation, pursued with discretion and humility, was based on an intense life of prayer and self-giving to others. He welcomed all, served all and loved all, especially the most vulnerable and the outcast, while always fully respecting the Human Person, freedoms and choices included.

These gifts, together with a great sense of initiative, creativity and determination, paved the way for a true Community: a place where People know each other, care about each other and establish bonds of solidarity and sharing.

He saw this project come to life with the foundation, in 1981, of  Carcavelos Parish Community Center (CCPC), which, in many ways, is a pioneering project, which truly reflects the wonderful spirit which always moved Father Aleixo Cordeiro.

1984
HOME CARE and soup for the elderly.
MEDICAL and NURSING services.
LAUNDRY services.

1987
COMPUTER COURSES – Inforjovem for young people
Newsletter “ÁGORA”.
The CAIJ visits several schools in order to share information.
The CAIJ presents a radio programme at Rádio Marginal.
First Meeting of BRINCADEIRA (Play) with the participation of the primary schools of Carcavelos.
InterCentre meetings

1989
“PLAY PMEETING” – Annual meeting of the primary schools of Carcavelos with the participation of the elderly.

1990
Construction of the new Building (May).
The AJAC participates in the FIL – Crafts Fair

1993
BAC – Bolsa de Alimentos de Carcavelos (Food Bank of Carcavelos) – Fighting social exclusion.
Participation in the EUROPEAN NETWORK OF INNOVATIVE PROJECTS  for the elderly and solidarity between generations through the organisation of several events.
FOLKLORE group for the elderly.

1998
The Centre is granted the status of “Legal Person of Public Utility” (DR – 18.04.1998).
“REINVENTAR A COMUNIDADE” (Community revitalizing programme)
“CRIA”- Project designed to provide support and information to people with HIV.
Youth EXCHANGE programme with Iceland.

1999
The Centre receives a donation of a land plot in Algarve from the couple Manuel and Rosa – Sta. Bárbara de Nexe.
EUROPEAN VOLUNTARY SERVICE- The Centre becomes a sending Institution.
Project BAC is renamed PROJECTO INTERVIR (PROJECT INTERVENE) – Integrated support to underprivileged families.
Organisation of the International CONGRESS of Gerontology.
Participation in the INTERNATIONAL MEETING of Gerontology in Gallarat (Italy) and Belgium (Louvain-la-Neuve).

2007
“Mães no Centro” (Mothers at the centre) – A place where mothers can meet and share their experiences.

2009
16th May – Laying of the foudation stone of the new building.
October – Beginning of the construction of the new building
The Centre is recognised by the IES – Institute for social entrepreneurship – for the project “Reutilização” (Reuse).
The UNIVA is renamed GIP – Gabinete de Inserção Profissional (Professional inclusion office).